The twenty fourth meeting of the Communications and Publications Committee (CPC) of the European co-operation for Accreditation (EA) was held in the period between 18th and 19th September 2013 in Warsaw, Poland and was organised by the Polish Accreditation Body (PCA).

Malgorzata Olczak-Wasik, PCA, welcomed the CPC delegates and wished them a fruitful meeting.

Vagn Andersen, CPC Chair, introduced the most important information from the previous period, and informed the CPC members that the twenty fourth CPC meeting would also be attended by Lucyna Olborska, PCA representative, in order to check the observance of the CPC Terms of Reference. Moreover, he informed the delegates that it would be necessary to elect the new CPC Vice Chair given that the mandate of the current one ended (Jon Murthy, UKAS colleague).

Drafting of the new EA logo was discussed during the meeting given that it had to be aligned with the new EA website design. However, the final version of the said logo was agreed on, whereas the designer would be sent a technical specification containing the description and properties of the logo agreed on during the meeting.

When it comes to the database search engine for accredited CABs on EA’s website (EA Search Facility) it was agreed to abort the activity for the time being, but it will be re-established once the technical capacities are put in place in terms of the new platform that will enable all accreditation bodies to transfer the data to the EA database on a regular basis. However, the final decision remains to be made by the EA General Assembly.

The new structure of the EA website intranet was agreed on and it is expected that it will be updated as soon as possible when it will be adapted to meet the new needs of the EA members.

The CPC Chair highlighted that the news focus and subjects had to be decided upon given that these had to be published on the EA website and that CPC members would need to provide their input. The news will have to be updated for the newly agreed structure since the EA Secretariat does not have the necessary capacities to perform the said activity on its own. It was agreed that a Task Force Group would be established to collect and prepare the news, whereas it will be supported by the current CPC Chair, Vagn Andersen, that will act from now on as an EA EX (Executive Committee) member given his experience in this field.

The importance of EA members’ input when it comes to the EA work was also tackled given that their contribution to the work of the EA committees and task force groups is essential for unhindered growth and development of the EA members. Therefore, it was agreed that the accreditation bodies would send EA the 2013 data when it would be determined if the progress had been made when compared with 2011-2012 period.

At the end of day 1, Marcus Long, Chief Executive of the Independent International Organisation for Certification, IIOC, gave a presentation when he explained the structure, mode of work and role of this international organisation as one the EA recognised Stakeholders. He explained that he would attend the March 2014 CPC meeting to further discuss certain topics of IIOC interest.

The next CPC meeting will be held in the period between 5th and 6th March 2014 in Belgrade, Serbia, and it will be hosted by the Accreditation Body of Serbia (ATS).

In accordance with the brand new programme entitled “Art of Accreditation” that enables presentation of an activity/masterpiece in different artistic and communication forms at each meeting, Vitaly Bohaievsky, representative of the Ukrainian Accreditation Body (NAAU), handed over a painting representing the PCA logo to Malgorzata Olczak-Wasik, PCA. 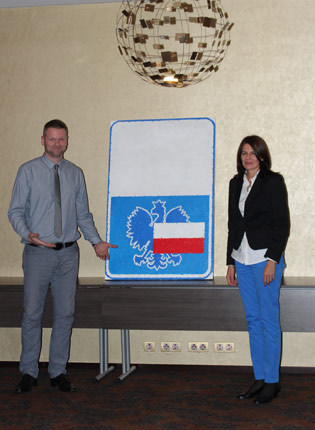 Katarina Bogojević attended the meeting on behalf of ATS.