On 15th April 2013, the Accreditation Body of Serbia organised a lecture on the subject of “ATS, accreditation and legal framework governing accreditation in the Republic of Serbia”. The lectures were given by Jasna Stojanović, ATS Acting Director, and Biljana Tomić, Head of the Department for Legal and General Affairs. The lecture was intended for the undergraduates (attending Economic Law lectures) and MA graduate students (legal and economic affairs course of study, exam: Economic Law) at the Law School, University of Belgrade.

The lecture aimed at introducing the generation of future experts to the accreditation procedure, the importance thereof and of accreditation bodies, and to the legal framework governing this field in our country that had to be harmonised with that of EU.

The first lecture was given by Jasna Stojanović who first introduced the students to the accreditation procedure and explained in detail each step thereof. The role of ATS and its status in international setting, i.e. at international organisations for accreditation, was explained later during the lecture. While explaining the ATS status and role, Jasna Stojanović highlighted an extremely important fact relating to the fact that ATS was an impartial and independent institution that should be evaluated by international and regional organisations for accreditation (peer evaluation). 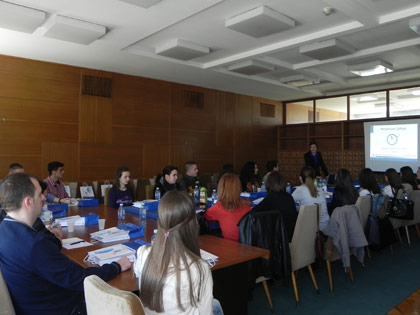 Biljana Tomić managed a discussion session with the students after the lecture when the possibility and importance of participation of legal experts in the accreditation procedure was explained in detail.

ATS will, in order to promote the importance of accreditation, be pleased to organise lectures for students from other faculties, as it has already been doing so far on a regular basis.