Regional conference on accreditation was held in Aranđelovac, Serbia, on 11th and 12th May 2012 and it was organised by the Accreditation Body of Serbia (ATS) as part of the EU regional IPA 2011 Project entitled “Quality Infrastructure in the Western Balkans and Turkey” that commenced last year. During a 30 month duration of the project worth 2.5 million Euros the following will be delivered: at least 20 hands-on training sessions with about 200 delegates, at least 11 PTs with at least 55 laboratories participating therein, including the national accreditation bodies (ABs) and national metrology institutes.

The conference was attended by the representatives of the national ABs from the Western Balkans (Albania, Bosnia and Herzegovina, Kosovo (UN 1244), FYR of Macedonia, Serbia, Croatia, Montenegro), David Norris, Team Leader of the regional IPA 2011 project, and Jelena Popović, Assistant Minister, QI Sector at the Ministry of Economy and Regional Development of the Republic of Serbia.

The purpose of the conference was to introduce the representatives of the regional ABs to the current situation in the ABs, exchange experiences on the subject of the EA peer evaluation, upgrade the cooperation through exchange of accreditation-related information, experience and documentation, joint organisation of seminars and conferences, mutual training of employees, exchange of assessors and technical experts and development of the new schemes of accreditation and joint participation of CABs in inter-laboratory comparisons. One of the topics related to the legal and financial aspects of the AB operation in accordance with the national legislation and EU Regulation EC 765/2008.

Unanimous agreement related to the organisation of such conferences was reached primarily for their purpose to exchange experience in order to develop accreditation in the region. It was agreed to invite the representatives of the following countries to the following regional conference: Slovenia, Greece, Bulgaria and Rumania.

Furthermore, it was decided that the ATS should prepare a consolidated List of Accredited Calibration Laboratories in the Region that would then be uploaded onto the websites of the regional ABs. In case of new schemes of accreditation implemented by the regional ABs it was proposed  that these ABs would help, together with the regional IPA project, PTB and GIZ, other ABs and inform each other about the training delivered by other projects. Additionally, it was agreed that joint training sessions could be organised for lead assessors, technical assessors and technical experts for the following fields: sampling (water and waste), official food control, EMAS, electronic signature, PT providers and information security. 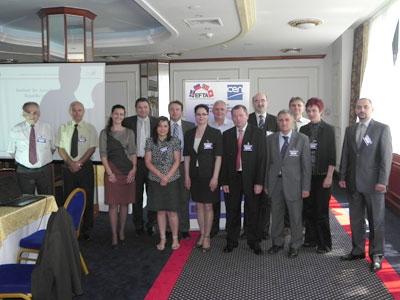