The twenty first meeting of the Communication and Publications Committee (CPC) of the European co-operation for Accreditation (EA) was held in the period between 21st and 22nd March 2012 in London, Great Britain. It was organised by the UK Accreditation Service (UKAS).

Graham Talbot gave an introduction given his role as both the EA Chairman and ILAC MCC / IAF CMC Chair when he thanked the present delegates for their contribution to the EA Strategy and Communication Plan. He underlined the crucial importance of the committee’s work in promoting EA and accreditation to the marketplace, in facilitating closer relationship between regulators and NABs, as well as with stakeholders and the EC, and in improving internal communication for more efficient information and experience sharing.

Vagn Andersen, CPC Chair, gave a brief update on the GA decision to proceed with the revision of EA-1/16 to include three annexes (a statement on the status of NABs, statement on reports / certificates issued by accredited CABs, and a template for accreditation certificates) as proposed at the 20th CPC meeting, and on the adoption of the EA Marketing and Communication Plan 2011-2015 by the EA Executive Committee. He added that the Alignment Package was presented by the EC at the end of 2011 since the goal was to align 10 Directives with the requirements for notified bodies as laid down in the Decision No. 768/2008. The said EA Marketing and Communication Plan raises a question related to the improvement of communication with the EC with which there are only bilateral contacts. For this important issue to be resolved there must be a contribution made by CPC members in terms of future communication routes. Graham Talbot pointed out that the Steering Group remains an essential forum for contacts with the EC. The challenge for EA is now to promote accreditation in every relevant DG as a whole, not just among individual persons. Contact persons themselves have to circulate information within their respective DGs as part of internal briefing and communications. Graham Talbot Graham suggested that the next meeting of the Steering Group (established by the Directorate General for Enterprise and Industry - DG ENTR) to be held on the 16th April 2012 would be an excellent opportunity to present the problem in order to define the mode of communication between the EA and EC. The EA Secretariat was asked to produce a list of contacts already known at the EC, while the CPC members were also invited to provide the names of EC persons already contacted by their NAB.

Following a survey carried out in 2008, a best practice guide was published to support NABs to develop closer relationships with national authorities as required by the Accreditation Regulation 765:2008. This document is a valuable tool, however it now requires revision. In parallel, this document has been taken on by the ILAC MCC and IAF CMC to make it more relevant for a global audience.

Revision of the document entitled Conditions for Use of Accreditation Symbols and Reference to MLA Signatory Status was made and it aimed at aligning the EA conditions with ILAC and IAF ones. Therefore, the CPC Chair proposed that the said document should contain an introductory part explaining that ILAC P8 set out the conditions for laboratories, whereas a short further guidance with specific requirements for the certification and inspection areas was needed.

Revision of the document entitled EA-1/16: Statement of equivalence - Enhancing visibility of accredited results was made, but it was agreed during the meeting to harmonise the wording in order to avoid misuse of the wording, and to take into consideration legal requirements at national level and a need to clearly differentiate between EA MLA and BLA. It is necessary to use the clarification made in EA-1/08 as regards the two types of signatories to the said agreements.

EA MAC Annual Report 2011 meeting is not very well known among CPC members and therefore not used for promotional purposes within EA. Therefore, it was agreed at the London CPC meeting to produce EA MLA Annual Report that would follow the same format as the IAF Annual Report. It was stated that it should be produced as a template to ensure simple update of the future versions.

When it comes to the attainment of the objectives defined in the EA CPC Communications Strategy 2011-2015 it is necessary to draft the EA CPC Work Plan as a useful tool for monitoring the progress of the Strategy implementation.

In order to upgrade EA Data Base Search Facility it will be necessary to link key words to the activities of accredited CABs by October 2012 when a workshop will be held during the Paris CPC meeting to promote the EA Search Facility. Additionally, there is a need for the NABs to transfer data related to the accreditation of GHG verifiers.

It is necessary to re-design the website and refresh it to be made more user-friendly and tailored to up-to-date usability to get a professional look-and-feel in line with the EU goals. This redevelopment will focus on such key aspects as a full search engine, multimedia tools and a meeting area. This means that access rights will be given by the EA Secretariat.

It was reported that the following International Accreditation Day would be themed - Accreditation: supporting safe food and clean drinking water. A brochure and a short promoting film will be jointly produced, published and uploaded by IAF and ILAC.

Re-development of the ILAC website, to be completed by 2014, should be done by regional representatives. ILAC and IAF set up a joint file sharing system for committee chairs to upload documents for the ILAC/IAF meetings. Each region should involve one person to develop a specification.

EA Secretariat has a license enabling online meetings of the Working Groups and encouraging WGs to use the software if they require communication between meetings.

There is a need to develop strong relationship with a larger number of technical organisations and stakeholders and members are invited to share national contacts for the October meeting when this agenda item will be progressed. It is also important that NABs inform the CPC about the new activities in their countries so that the system could be constantly upgraded.

The next CPC meeting will be held in the priod between 10th and 11th October 2012 in Paris, and it will be hosted by the French Accreditation Body (COFRAC).
Jasna Stojanović and Katarina Bogojević attended the meeting on behalf of the ATS.

In accordance with the brand new programme entitled “Art of Accreditation” that enables presentation of an activity/masterpiece in different artistic and communication forms at each meeting, Vitaly Bohaievsky, representative of the Ukrainian Accreditation Body (NAAU), handed over a painting representing the UKAS logo to the UKAS Director (Graham Talbot). 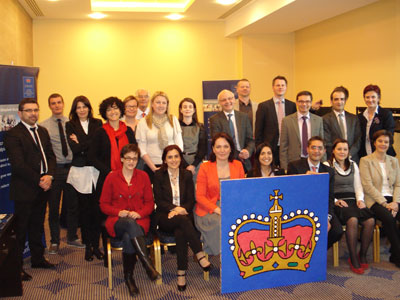