On the basis of the EA MAC recommendations that were adopted at October meeting in 2011, the General Assembly (GA) of the European co-operation for Accreditation (EA) agreed in November 2011 that the Accreditation Body of Serbia (ATS) should be granted the associate membership status starting from 23rd November 2011.

At the 2011 May meeting of the EA GA amendments of the Articles of Association and Rules of Procedure of the EA were adopted in line with the newly adopted version of the EA Strategic Plan for 2010-2015. The main change lies in the re-introduction of the EA Associate Membership. The criteria for membership have been revised accordingly and published in EA-1/17 – Supplement 1: Criteria for Membership. This revision was made not only to define membership criteria for Associate Members, but also to align the document with Regulation (EC) 765/2008 requirements.

Director of the Accreditation Body of Serbia, Dejan Krnjaić PhD, expressed his thanks for being granted the associate membership status and expressed the hope that the Republic of Serbia would soon become a candidate country for the EU membership, whereby all requirements for full membership of the ATS in the European co-operation for Accreditation would be fulfilled. 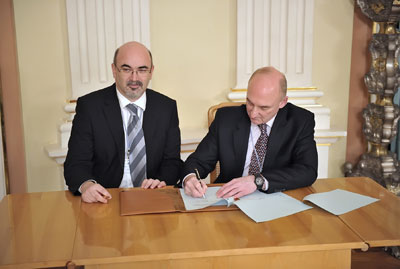