In the period between 27 and 28th May 2009 the 23rd session of the EA General Assembly was held in Luxembourg, the first one after the 1st April official recognition of this organisation as a body providing support to the system of accreditation in the European Union.

During the EA AG session 30 resolutions were adopted, whereas the following ones were the most important:

- Resolution on signing of the Framework Partnership Agreement between the European Cooperation (EA) and the European Commission
- Resolution on accreditation of medical reference laboratories in accordance with the requirements of ISO/IEC 17025 and ISO 15195
- Resolution on the necessity to participate in inter-laboratory comparisons (ILCs), preferably in those ILCs specified by the EA Laboratory Committee.

During the General Assembly session a Memorandum of Understanding was signed with WELMEC (European Cooperation in Legal Metrology).

The Director of the Accreditation Board of Serbia, Dejan Krnjaić, PhD, took an active involvement in the work of the General Assembly where the peer evaluation application submitted by Serbia was confirmed. 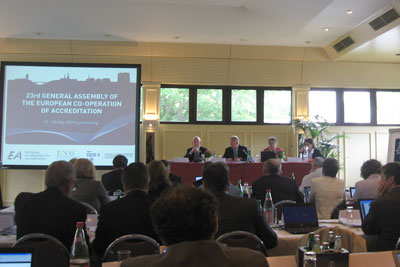