Jelena Popović, Assistant Minister in the Sector for Competitiveness and Quality Infrastructure within the Ministry of Economy and Regional Development, opened the seminar entitled “Accreditation Will Lead Us to Europe” that was organised for accredited bodies, assessors and technical experts by the Accreditation Board of Serbia and was held at the Sava Centre.

During this seminar Ms Popović emphasised that Serbia would be facing the revocation of a large number of mandatory standards, while the mandatory status of other standards would be confirmed through the implementation of relevant technical regulations.

The Assistant Minister highlighted that Serbia was under an obligation to take on about 80 percent of the EU standards by 2012, and added that that was one of nine conditions for the EU membership.

Ms Popović reminded the present participants that the Government had adopted and sent proposals of the Law on Technical Requirements for Products and Conformity Assessment and the Law on Standardisation to be adopted by the Parliament, whereas sub-laws should be drafted to upgrade the accreditation system and to take on eight EU New Approach Directives.

She explained that the Law on Technical Requirements for Products and Conformity Assessment would be applied to all products other than those covered by special laws as in the case of the Food Safety Law, and the aim would be to protect consumers, environment and property.

Ms Popović pointed out that this year’s priority would be to adopt the Law on Metrology and the Law on accreditation, and it was anticipated that the Action Plan for the Drafting of Technical Regulations would be implemented. This Action Plan provides that all the ministries should make proposals for the regulations governing areas falling within their competence.

Alberto Camarata, Chief of the Section for European Integrations and Economy of the European Commission in Serbia, emphasised that the accreditation system was very important for the Serbian businesses, and emphasised that the business, given the decision on the unilateral implementation of the Stabilisation and Accession Agreement, would have to combat the new challenges and learn how to make use of the possibilities that the system could offer.

According to him the EU realised that the existing legislative framework had some deficiencies and therefore it was proposed for the new framework to enter into force in 2010. In the meantime, the focus will be on the implementation of regulations in order to overcome the crisis as efficiently as possible.

He pointed to the fact that the EU provided help to Serbia in the form of advice on quality infrastructure which was underpinned by a donation of about 10 million Euros through CARDS programmes and IPA Projects.

Zoran Cekić, State Secretary of the Ministry for National Investment Plan was of the opinion that the system of accreditation of international standards would facilitate the implementation of public investment projects and their monitoring.

He said that the introduction of international procedures would help the selection of investment projects on the basis of their development potential, i.e. their contribution to the pace of transition of the country.

Dejan Krnjajić, PhD, ATS Director, explained that the precise number of accredited bodies in the country is 311. This includes those that are in the process of accreditation, whereas it can be expected that the number would reach the total of 350.

He emphasised that it was very important to cooperate with national accreditation bodies of other countries and that cooperation was intensified during last year and reminded the present participants that the ATS signed the agreement with the Accreditation Body of Montenegro and changed the existing agreement with Macedonia with the aim of implementing the Central European Free Trade Agreement (CEFTA 2006). This would help remove unnecessary obstacles to trade and put in place regional and national technical assistance programmes through CARDS programme and IPA projects.

“The ATS employees and their knowledge and experience are the most important resource of the ATS. Permanent improvements and maintenance of competence level of both full-time and outsourced employees is synonymous with the ATS policy”, said Mr Krnjaić and announced that the technical committees would be formed this year to facilitate the work of the ATS. Furthermore, there is a plan to establish electronic documentation network.

Mr Krnjaić reiterated that the ATS would, without doubt, be oriented to the integration into EA, IAF and ILAC, giving heed to the national capacities of certain areas of conformity assessment. The task of the ATS is to constantly optimise the number of competent bodies ensuring that the quality infrastructure of the Republic of Serbia will be competitive and ready to embrace the principles of the EA quality infrastructure at the moment of complete integration of the ATS into the EA and signing of multilateral agreements for different areas of accreditation.

The ATS commenced comparing the quality of its work with other European accreditation bodies which is a prerequisite for the recognition of reports and certificates issued by our accredited bodies. The said process will facilitate the movement of goods and services, and contribute to economic development of our country.

According to him a key element of the cooperation with other national accreditation bodies is peer evaluation, while Serbia (ATS) will no longer be assessed as per ISO 17011, but on the basis of the implementation of the new European regulations.

This seminar also tackled the importance of promoting accreditation as a vital element of a country’s quality infrastructure, whereas the aim is to ensure awareness raising on its importance as a measure to increase competitiveness and facilitate the access of our products to new markets.

The promotion of accreditation implies a full cooperation of all interested parties, public administration body subordination, accreditation awareness raising, and provision of public access to all relevant information about conformity assessment and accreditation system.

Dejan Krnjaić, PhD, presented to the present participants the new EU Regulation on the placement of goods on the market, accreditation and market surveillance.

The aim of the seminar is to introduce the accredited bodies, assessors and technical experts of the ATS to the new EU Regulation pertaining to measures for placing goods on the market, accreditation and market surveillance, novelties in the work of the ATS, new rules and relevant documents defining criteria for the implementation of accreditation process.

The following persons gave lectures at the seminar: Vida Živković, ATS Deputy Director, Natalija Jovičić Zarić, Assistant Director for Accreditation Affairs, and Biljana Tomić, Head of Division for Legal and General Affairs, to present to the accredited bodies, assessors and technical experts new Rules of Accreditation, upgraded and changed documents relevant to the accreditation criteria and process, and to present the requirements of SRPS ISO/IEC 17025 and SRPS ISO/IEC 17020 where additional interpretation and explanations are needed.

Natalija Jovičić Zarić, MSc, presented to the assessors and technical experts practical examples (positive and negative ones) during discussion that aimed at upgrading of the assessment process, whereas negative examples related to the implementation of corrective measures to rectify the identified deficiencies as soon as possible.

The last seminar topic, but equally important as any other, related to a round-table discussion: Development of assessment and proposed amendments of the check list, working lists and other documents with Vida Živković, MSc, as a facilitator. Assessors and technical experts were in a position to propose amendments of documents or present complaints or make suggestions that would facilitate their work, upgrade assessment and communication with the ATS. Majority of proposals made by assessors and technical experts was adopted since they related to the changes in accreditation process and ATS procedures that were being implemented due to the upgrade of the management system. This is, as Mr Krnjaić emphasised during his lecture, a priority of the ATS. 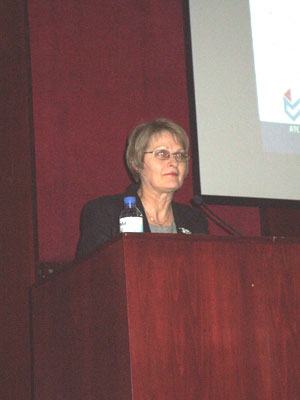 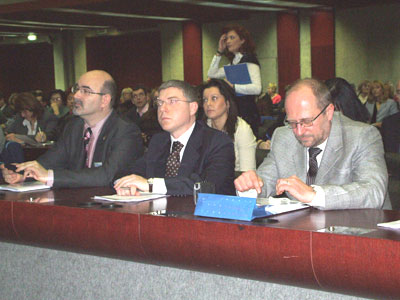 Dejan Krnjaić, PhD, ATS Director, Alberto Camarata, Chief of the Section for European Integrations and Economy of the European Commission in Serbia, and Bojan Pečevar, Team Leader of the EC Technical Assistance Project for Accreditation 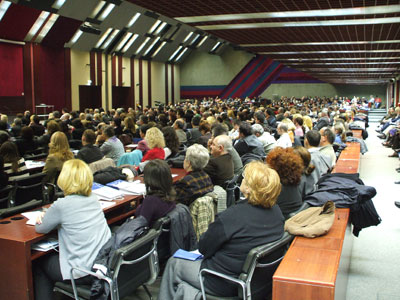 More than 500 representatives of accredited bodies, assessors and technical experts of the ATS participated in the seminar 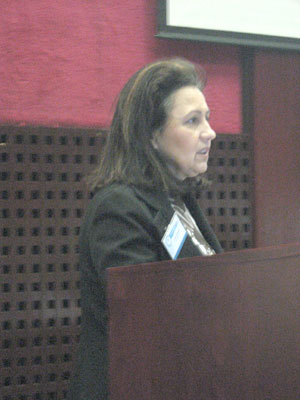 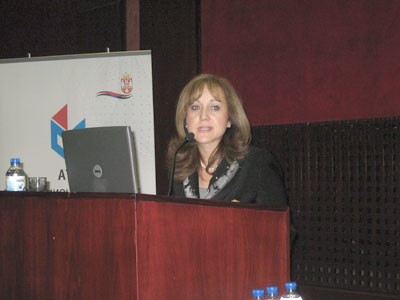 Biljana Tomić, Head of the ATS Division for Legal and General Affairs 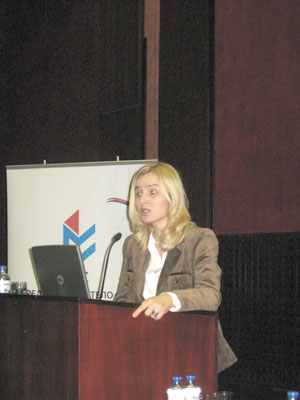