30th September 2008 - Fourteenth session of the Communications and Publications Committee (CPC) of the European Cooperation for Accreditation (EA) was held in Oslo in the period between 25th and 26th September and was organised by the Norwegian Accreditation (Norsk Akkreditering/NA).

Apart from the documents that were discussed it is interesting to mention the adoption of the CPC document - Terms of Reference defining the work of the Committee, as well as the establishment of a Working Group for the development of a revised Annual Work Plan of the Committee and Communications Plan. The Committee adopted the prepared version of the Welcome Kit document that will be posted on the EA internet site as an interactive document. Furthermore, the new version of the text was adopted in the EA website Section entitled Promoting MLA.

Members of the Committee have been informed about the decision made at the last session of the EA General Assembly pertaining to the strengthening of capacities of the EA Secretariat and in this view the
Secretariat increased the number of employees from two to three persons.

Activities carried out by the EA to celebrate 9th June as the International Accreditation Day,were also discussed, as well as experiences from the member states.
During the session two documents were adopted and they would be turned by the Working Groups into a version to be adopted at the General Assembly. The said documents pertain to the Rules for the Use of Accreditation Logos and Symbols of Accreditation Bodies and Signatories to the MLA, as well as reports and certificates of accredited organisations and procedures for passing and adopting the EA Guides, and adopting the ILAC/IAF documents.

Member States exchanged their experiences with the survey as regards the level of user satisfaction. The greatest number of countries conducts this survey once a year, while almost all clients are covered by the survey at least once every four years. The recommendation of the Committee is to make the survey mandatory since the answers of the clients to the questions asked during the survey vary between 30 and 40% of initially surveyed clients, where clients may choose whether they wish to remain anonymous or not. Survey results have been mainly published at the internet pages of national accreditation bodies.

Drafted version of the EA publications as regards their format and appearance were also discussed, and a number of comments on the adopted version of the document entitled Rules for the Use of EA Logos had been received and would be taken into consideration for one of the future revisions of this document.

The decision made by the General Assembly held in Tallinn in May 2008, SRS was delegated a task within the Project Group 2 to participate in the preparation of a data base for the exchange of information and knowledge about the EU directives. By networking the accreditation bodies i.e. EA members, by using EA intranet capacities, members will be able to use electronic data exchange service as regards assessment requirements that must be met by conformity assessment bodies if they wish to operate as notification bodies as per a certain directive.

Jasna Stojanović attended the meeting of the Committee on behalf of the ATS. 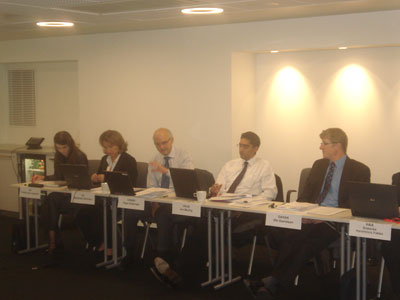 Chairman of the SRS, Vagn Andersen, DANAK (in the middle)