Training sessions for the ATS assessors were organised in September and October 2011 by the ATS and GIZ in order to make the said assessors capable of producing the certification body assessment reports to be submitted by certification bodies when applying to the EC to be included in the EU List of Recognised Control Bodies for the Purpose of Equivalence in the field of organic production.

The National Action Plan for the Development of Organic Production (covering a five-year period) that was published by the Ministry of Agriculture, Forestry and Water Management in 2009, set the establishment of operational and efficient system of control and conformity assessment in the field of organic agriculture as one of the priority goals. Federal Republic of Germany is implementing, through its organisation for international cooperation (GIZ) and support programme for the improvement in competitiveness of small and medium-sized enterprises in Serbia (ACCESS), a large number of activities aiming at the development of quality infrastructure in the sector of organic agriculture.

Furthermore, training sessions for assessors were organised in 2010 in addition to other activities to meet the needs of the Accreditation Body of Serbia (ATS). The training was the first step towards the upgrade of capacities of the ATS assessors to assess certification bodies in the field of organic production in accordance with EN 45011.

Additional training was organised in 2011 and it was based on the first one. On that occasion, special emphasis was placed on the upgrade of capacities of the ATS assessors to be able to produce assessment reports in line with the Regulation (EC) No. 1235/2008 and EU Import Rules for Organic Products.

For this service to be provided the ATS has to demonstrate that the requirements of ISO/IEC 17011 are fulfilled. Additionally, EU has a special request relating to the competence level of AB assessors working in the field of organic production, i.e. legislation governing this field.

Second training was delivered in the period between 19th and 20th September 2011 and it was organised by GIZ and ATS. The training aimed at preparing the ATS organic production assessors to be able to produce assessment reports that would be submitted by interested certification bodies to the European Commission to be able to apply for the EU List of Recognised Control Bodies for the Purpose of Equivalence. Third training was delivered in the period between 31st October and 2nd November when a simulation exercise (on-site assessment) was carried out, i.e. witnessing of a CAB activities was carried out. Furthermore, assessment report writing in line with the Regulation (EC) No. 1235/2008 and Quidelines on Imports of Organic Products into European Union was part of this training. Representatives of the Department for Organic Production (competent authority) from the Ministry of Agriculture, Trade, Forestry and Water Management attended the training together with the ATS representatives and assessors performing organic production accreditation activities. The lectures were given by Jochen Neuendorff and Jutta Krawinkel, assessors of the German Accreditation Body (DAkkS). 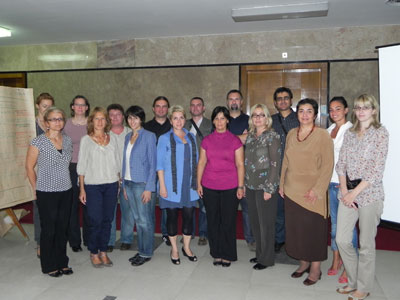 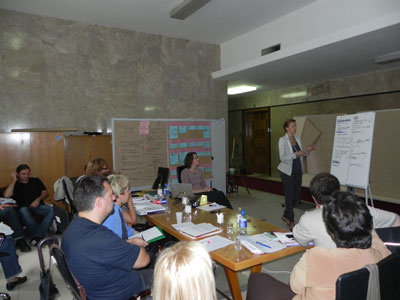 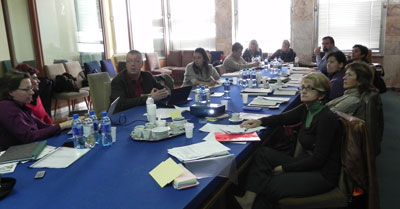 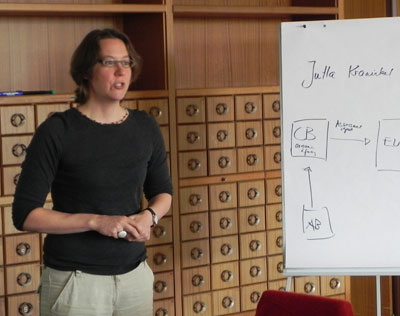