On Friday, 17th December 2010, a closing conference of the EU funded project entitled “Technical Assistance to Quality Infrastructure Institutions in Serbia“ was held at the premises of the Serbian Chamber of Commerce.

The Project is focused on fostering legal, regulatory and institutional reforms in the field of quality infrastructure in the Republic of Serbia in compliance with the European Acquis Communautaire and WTO membership requirements.

The Project was implemented by AFNOR, France, in consortium with the Danish Accreditation and Metrology Fund (DANAK), Slovenian Institute of Quality and Metrology and Faculty of Electrical Engineering, University of Ljubljana. The Project integrated 4 key components: Quality Infrastructure and Conformity Assessment Department at the Ministry of Economy and Regional Development (MoERD), Institute for Standardization of Serbia, Accreditation board of Serbia, and Directorate of Measures and Precious Metals.

The conference was opened by Jelena Popović, MoERD Assistant Minister, that presented on that occasion the results achieved during the Project (September 2008 – December 2010) which increased the competitiveness of our economy and industry. After her address has ended, José Antonio Gomez, First Counsellor, Head of Section – Operations, EC Delegation to the Republic of Serbia, addressed the present participants. On that occasion, he thanked the Ministry of Economy and Serbian Chamber of Commerce and confirmed that he was very pleased to see that all the Project objectives had been met. Mr Gomez said that quality infrastructure had an important role in Europe when it comes to free movement of goods, but he also mentioned that answers to the EU Questionnaire, the completion of which is one of the requirements for obtaining the EU membership status, had already been prepared (Chapter 3 – Free movement of goods). The goal of this EU funded Project is to upgrade the capacities and competence levels in the field of quality infrastructure, and to harmonise with the EU acquis.

The significance of the Project and its success were confirmed by representatives of the Project beneficiaries – Accreditation Board of Serbia, Directorate of Measures and Precious Metals, and Institute for Standardization of Serbia. At the beginning of his presentation, Dejan Krnjaić PhD, Director of the Accreditation Board of Serbia, highlighted the importance of cooperation between the key Project beneficiaries (Ministry of Economy, ISS, DMDM, and ATS) and amendments of the original Terms of Reference (Component 3) to take into consideration the change in the circumstances in terms of the original ToR drafting. Mr Krnjaić emphasised that the ATS quality management system became more efficient owing to the Project activities which resulted in the upgrade of the ATS procedures. This facilitated the preparations for the peer evaluation that will be performed by the EA assessment team in spring 2011. If the EA assessment team’s findings turn out to be positive, the MLA will be signed. Therefore, certificates issued in the Republic of Serbia would be recognised throughout Europe. According to Mr Krnjaić, a visit to the Accreditation Body of Greece (ESYD), as an MLA signatory, helped the ATS employees prepare for the said peer evaluation and upgrade their work methods. Thanks to the input of Project experts necessary training was delivered to the ATS permanent employees and external assessors, and the new regulations were drafted in this field (the most important of which is the Law on Accreditation). At the end of his presentation Mr Krnjaić thanked the Project team and the EC Delegation for the provided technical assistance and achieved results.

Boris Laštro, Assistant Director at the Directorate of Measures and Precious Metals, presented the results achieved in the field of metrology and emphasised that real laboratory capacities were determined owing to the participation in inter-laboratory comparisons, whereas the two of them (one calibration laboratory and one testing laboratory) started the accreditation process that should be finalised in January 2011.

Certificates confirming the conformity of the established integrated management system with the requirements of ISO 9001:2008 (SRPS ISO 9001:2008) and ISO/IEC 27001:2005 (SRPS ISO/IEC 27001:2009) were presented to the ISS on that occasion. The said system was put in place owing to the help that the ISS received as part of the Project ToR. Available information show that it is most probable that the ISS is the first national organisation for standardisation in the world that put in place and certified information security management system as per ISO/IEC 27001:2005.
Ivan Krstić MSc, Director of the Institute for Standardization of Serbia, presented the activities that enabled the ISS to prepare a modern  website, introduce management systems (ISO 9001 and ISO 27001), while information about the standards can be obtained at the ISS Information Centre. Preparations for the full membership in international organisations for standardisation, CEN and CENELEK, were completed. At the end of his presentation Mr Krstić presented the the representatives of the EC Delegation and AFNOR, the Project Team Leader (Dr George Tsorbatzoglou) and an expert from the Institute for Standardization of Bulgaria (Ivelin Burov) with certificates since they were a token of gratitude for achieved results in the field of standardisation.

George Tsorbatzoglou, Project Team Leader, presented a summary review of project-related technical data and achieved results, and emphasised that good cooperation and communication with the Project beneficiaries was important for unhindered implementation of Project objectives. Furthermore, he highlighted that after the Inception Report had been drafted the number of expert/days had to be increased by 20% so that all Project objectives could be met.

The conference was closed by Miodrag Dugandžija that addressed the present participants on behalf of the Ministry of Economy and Regional Development, and on that occasion he thanked the EC Delegation for the donation made by the European Union (for the implementation of the Project) and contributions of the entire Project team. 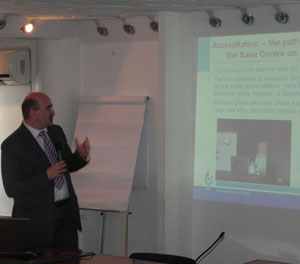