22nd General Assembly of the European Cooperation for Accreditation (EA) was held in Estoril, Portugal, on 18th and 19th November 2008.

The Agenda was predominantly oriented to to the newly adopted EU legislation on free movement of goods and, as a result, necessary organisational and functional changes in the EA.

A larger number of documents was adopted at the General Assembly including the following:

Furthermore, twenty two resolutions were adopted whereas the most significant one pertains to the new package of measures for placing goods on the common EU market and to the obligations that signatories to the Multilateral Agreement must meet by 1st January  2010: a single national accreditation body appointed and recognised by the Government, independent and not-for-profit, and acting with public authority in the public interest...

However, accreditation bodies that have a BLA with EA shall, by 1st January 2012, be required to meet the same requirements as an EA Full Member that is a signatory to the EA MLA.

At the 22nd General Assembly the Republic of Serbia was represented by  Professor Dr Slobodan Petrović, President of the Management Board, and Dejan Krnjaić, Director of the Accreditation Board of Serbia. Their participation led to the improvements in their relationship with the representatives of the EA signatories, and with the representatives of the neighbouring countries. Additionally, significant breakthroughs were made for the Accreditation Board of Serbia to commence the application process to join the ILAC and IAF. 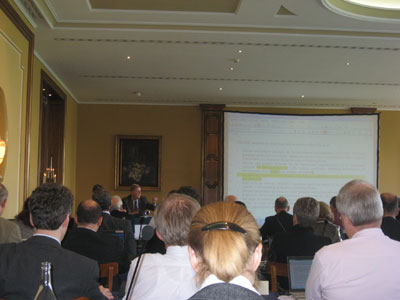 Lorenzo Thione, President of the EA giving his presentation at the General Assembly