1st June 2008 - 21st General Assembly of the European Cooperation for Accreditation (EA GA) was held in the period between 28th and 29th May 2008 in Tallinn in the Republic of Estonia and was hosted by its national accreditation body.

The Accreditation Board of Serbia that is a signatory to the Contract on Cooperation with the EA, was represented at this Assembly by Dr Dejan Krnjaić, the ATS Director, and Vida Živković, MSc, the Assistant Director for Accreditation Issues.

This session of the General Assembly was of special importance since the issue and topics that were discussed were indirectly connected to the future development of accreditation process in Europe in accordance with the new EU Regulation pertaining to the movement of goods on the single EU market and attaching a special importance to accreditation and market surveillance.

During the session of the EA General Assembly the following topics were discussed: the new EU Regulation pertaining to the movement of goods, with special emphasis on further development possibilities, status and the new organisational structure of the European Cooperation for Accreditation and strengthening the importance of accreditation, relationship between the EA and EC, EFTA and competent national authorities, initiative for improving values and credibility of accredited management system certification, as well the contribution of the EA in establishing a uniform baseline of accreditation worldwide.

The Assembly accepted the EA documents (EA-2/14 Procedures for Regional ILCs as a Support to EA MLA, EA Criteria for a Flexible Accreditation Scope, and the like), and delegates also discussed about the cooperation with the ILAC, IAF and other regional organisations for accreditation standardisation, metrology, and about the operational issues including reports of chairpersons of the EAAB and MAC, CPC, LC, IC & CC Committees.

The EA supported a new legislation package pertaining to the movement of goods which was adopted by the European Parliament in February this year and which particularly emphasised an ever important role of accreditation and European Cooperation for Accreditation. In that respect the EA delegated a series of working groups and project teams the task of which was to explore the best organisational structure, work procedures and necessary resources that would enable the EA to meet expectations and tasks defined in the said legislation, and which are related to the European accreditation infrastructure. The General Assembly made key decisions that would make the EA ready to embrace it by 1st January 2010.

It is important to highlight a discussion that covered Articles 4.1, 4.2 and 7.1 of the new EU Regulation pertaining to hiring foreign accreditation bodies in case when a national body has no capacities to offer a specified accreditation service in keeping with the EA ''cross-frontier police''. During the session a numerous doubts and concerns relating to this issue were raised. For example, how to define such services and what criteria could be applied in that case, as well as the issue of non-Member States having signed the ACAA Agreement or any other bilateral agreement.

At this General Assembly after a very fruitful discussion the conclusions were made and Resolutions important for future functioning of European accreditation system were adopted. A Memorandum of Understanding was signed with the Libyan LNCSM. A new signatory to the EA MLA is MSA (Malta) as regards testing laboratories, and TUNAK (Tunis) signed a bilateral agreement with the EA for testing and calibration laboratories. 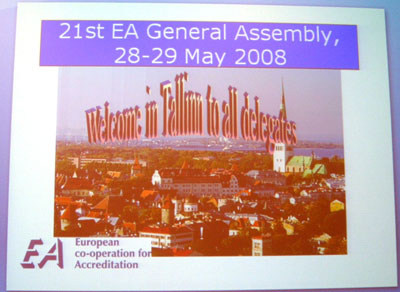